We are celebrating the introduction of the first ever Head Boy and Head Girl in the school’s 64-year history! 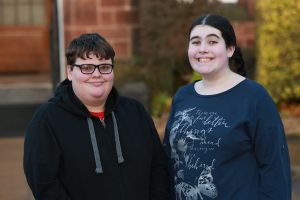 The new leaders will become ambassadors for the school and take an active role in developing school provision including representing the views of their fellow students.

After a rigorous selection process including interviews and presentations, the school’s first Head Boy and Girl were announced by the Headteacher at a whole school assembly.

Mrs Hildrey praised all six candidates who applied for the positions and thanked them for their presentations, which had to answer the question: ‘How can we make Abbot’s Lea the best special school in the world?’

Head Boy Dan Houghton put forward great ideas on how the school can promote the development of meaningful life skills for sixth formers and improve recycling to help the environment. His personal ambition is to lead a reading volunteer buddying scheme for younger students.

He says: “I am so happy to be Head Boy. After I finish school I want to go to college and study Child Care and this opportunity will really help with my future ambitions.”

Head Girl Chantelle Nicklin-Harvey shared Dan’s excitement for her new role and impressed the Headteacher with her passion for technology and her desire to help younger students in the school through positive role modelling.

She says: “I am so excited to be Head Girl. I’m looking forward to working on my ideas and gaining confidence and experience in this new role.”

Headteacher, Mrs Ania Hildrey adds: “It’s a real honour to announce our first ever Head Boy and Head Girl at Abbot’s Lea School. All the students who applied had brilliant ideas about how we can make Abbot’s Lea the best specialist school in the world. Chantelle and Dan both showed real strength of character, humility, an ability to lead others and a passion for helping younger students in the school.

“I am confident they will make a significant and positive contribution as Head Boy and Head Girl and I cannot wait to see them become fantastic ambassadors for Abbot’s Lea School community.”